How to Use Oxy-Acetylene Torch? 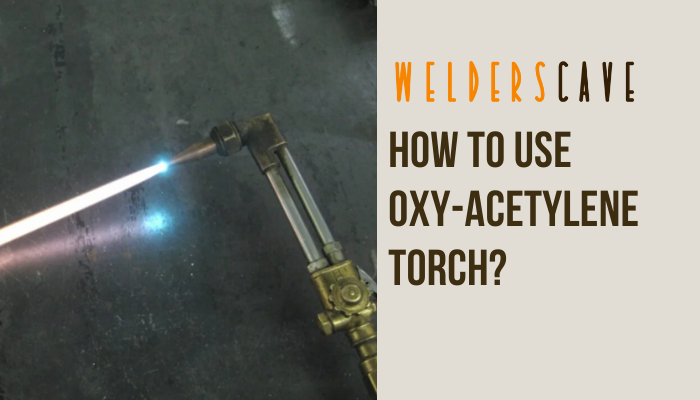 Oxy-acetylene torches use the basic mixture of oxygen and acetylene gases to create heat. The major advantage of it is that you can perform metalworks on pretty thick metals without much effort. This torch has benefits that are absent in other types of torches. It can make your work faster too.

Especially, the torch only works in four steps- lighting up the torch, setting it up, using it, and turning it off. Today we will show you how to use an oxy-acetylene torch with ease. No matter what workpiece you are working on, the work will be a breeze with the perfect instruments and following some tips.

Advantages of an Oxy Acetylene Torch

At first, we want to give you some reasons why you should go for an oxy-acetylene torch. It comes with many benefits. Among them, here are some.

Let us first show you the layout of a basic oxy-acetylene torch system. It has two hoses with valves to attach to gas cylinders of two gases. You may also notice a mixing valve on your cutting torch that helps both gases to reach the mixing chamber.

Before you use the torch, the gases need to be mixed properly. In this case, the oxygen goes through two sections. One is the mixing valve for oxygen, and the other is the mixing chamber where the oxygen mixes with acetylene.

How to Cut with an Oxy-acetylene Torch

Honestly, the cutting process is pretty simple. All you got to do is follow these steps

What should I Do After the Cutting Process with an Oxy-acetylene Torch Is Complete?

Here are what you should do after the cutting session..

What Safety Measurements Should I Follow Before Cutting with an Oxy-acetylene Torch?

Oxy-acetylene torch is one of the easiest torches to weld or cuts any metal. But no matter what, you must still be sure to know everything necessary before using it. We also suggest you make sure the surrounding is okay and there is enough air circulation. You mostly can’t and shouldn’t focus on anything else during the cutting process.

We added all the useful information you need to know to cut metals using an oxy-acetylene torch. But you should also read the instruction manual carefully as some torches may be built differently from the traditional ones.

Richard Boyer has been a professional welder for over 27 years of his life, and now he is a trainer and blogger providing critical information to anyone interested in welding. He is helping out both hobbyists, novice and professional welders to learn newer and better techniques. Read more about me

This website uses cookies to improve your experience while you navigate through the website. Out of these cookies, the cookies that are categorized as necessary are stored on your browser as they are essential for the working of basic functionalities of the website. We also use third-party cookies that help us analyze and understand how you use this website. These cookies will be stored in your browser only with your consent. You also have the option to opt-out of these cookies. But opting out of some of these cookies may have an effect on your browsing experience.
Necessary Always Enabled
Necessary cookies are absolutely essential for the website to function properly. This category only includes cookies that ensures basic functionalities and security features of the website. These cookies do not store any personal information.
Non-necessary
Any cookies that may not be particularly necessary for the website to function and is used specifically to collect user personal data via analytics, ads, other embedded contents are termed as non-necessary cookies. It is mandatory to procure user consent prior to running these cookies on your website.
SAVE & ACCEPT